Home Lightbox The Death of a Woman

The Death of a Woman 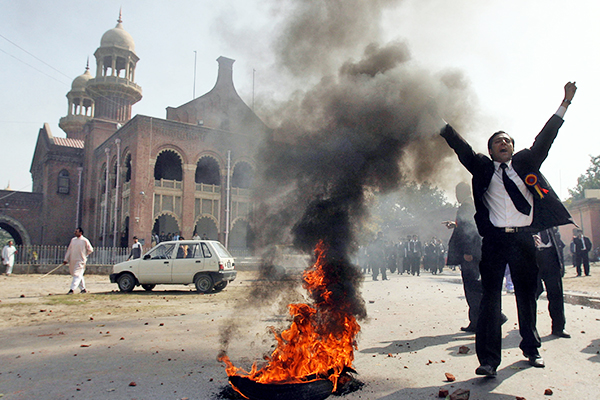 On Tuesday morning, a 25-year-old woman by the name of Farzana Iqbal was beaten to death by her family. Farzana was on her way to the Lahore High Court when her father, her brother, and a mob of family members attacked her with guns. When they missed, she ran but her brother grabbed her headscarf, making her fall down. As she lay on the ground, she begged for her life. In response, her family members smashed her head in with bricks.

Farzana was killed because she had married a person of her choice. Her family reacted to the love marriage in time-honored fashion; that is, by accusing her husband of kidnapping. Farzana was coming to the court to tell the judge she had not been kidnapped but had married of her own free will. She was three-months pregnant when she died.

Farzana died perhaps 10 to 20 yards from the gate of the Lahore High Court. To be more specific, she died on the potholed surface of Fane Road, next to where Turner Road branches off. Across the road—as in literally across the road—are the offices of the advocate-general of the Punjab and the Federal Judicial Academy. I suppose if the learned judges undergoing instruction at the Academy had been disturbed enough to come out and check what was going on, the dead body could have been used to instruct them in the finer points of criminal jurisprudence.

The judges were not alone in their indifference. Turner Road and Fane Road are Ground Zero for legal offices. There are at least a few thousand lawyers who work within a few blocks of where Farzana was killed. In the morning, which is when Farzana was killed, that particular crossroads is full of people hurrying to court. None of them did anything to stop her murder.

To be fair, the trainee judges and the passers-by have an excuse: they are not in the business of maintaining law and order. In Lahore, that privilege belongs to the Punjab police. There are at least two squads of police within 50 yards of where Farzana was killed. One squad guards the entrance to the Lahore High Court. The other guards the entrance to the Academy and the advocate-general’s office.

It takes time to beat a person to death, especially when the instrument in question is as blunt and unwieldy as a brick. In Farzana’s case, the attack reportedly lasted for about 15 minutes. During that time, Farzana’s husband ran to the police officers stationed at the court entrance and begged them to intervene. They refused.

This was not the first time that Farzana had been attacked. Her family members had first tried to kill her at her lawyer’s office but had been repulsed. They had then waited outside and tried to kill her again. This time, they were stopped by officers from a nearby police station. The relatives were then held for about an hour before being released without charge.

Fifty years ago, on March 13, 1964, a young woman by the name of Kitty Genovese was attacked and killed in New York City. The New York Times reported that, “For more than half an hour, 38 respectable, law-abiding citizens in Queens watched a killer stalk and stab a woman in three separate attacks.” The Genovese murder touched a raw nerve in America’s conscience. For decades thereafter, it has been used as a symbol of all that was wrong with city life and the anonymity of urban existence.

What I can speak to is the aftermath. Right after the killing, there was silence. As much as I detest suo moto actions, this was perhaps one moment when the chief justice of Pakistan should have demanded answers. But he didn’t. Even the chief justice of the Lahore High Court, the head of the august institution to which Farzana had turned for justice, said nothing. It was only on Thursday, 48 hours after the killing, that Prime Minister Nawaz Sharif issued a statement condemning Farzana’s murder as “totally unacceptable” and directing the Punjab chief minister, his brother, to take “immediate action.”

I am tired of writing outraged columns. Outrage has become a cliché, the one mode of expression that never dulls in this country because there is always something new to be outraged about. My television offers me 57 flavors of outrage—liberal outrage, Fauji outrage, mullah outrage, feminist outrage. And yet, surrounded as we are by professional outragers—outragists?—nobody found the time to be outraged about the death of a woman who had the misfortune to find love and the greater misfortune to believe in justice.

According to newspaper reports, a bench of the august Supreme Court of Pakistan has demanded assurances from the federal government that the citizens of Pakistan will not be allowed to starve to death. If this is how institutions now work, perhaps their Lordships would like to assure Farzana’s husband his dead wife will receive justice.

Very well written. Public execution should be the justice.

I’m not the slightest bit surprised. These so-called ‘upholders of justice’, particularly those in Punjab, are the same people who showered petals on the likes of Mumtaz Qadri and openly threatened a colleague (who later was murdered) in court because he dared represent someone accused of blasphemy. Why would they be the least bit bothered about a woman being killed by her own family at their doorstep? I think law schools in Punjab need to do a thorough psychological evaluation before admitting candidates.

Sad but true fact of our so called Muslim society. ..We dnt need America to kill us..We are own killers. …

Some of us have no words to describe how we feel. Like you we are tired of being outraged. I cried out of sheer helplessness. I cried again as I read your column. Has the social fabric of our society been torn beyond repair?

I agree to the writer that now we are tired of this outrage. Unfortunately, we are getting used to off murders, killing , bomb blasts. We are no more a nation who use to grieve if one soldier was killed by enemies. NOW, we read the news and move on.

Excellent diatribe, and well scripted narration of a gruesome tragedy. See my face book for the long comment. The empathy of the people and the concerned authorities is what makes the blood cuddle in the veins and the heart beat stops.

Love marriage is not a crime. It is a perfect choice. What better thing can be to follow one’s heart. Lovers are blessed by God in a union. It is the most beautiful relationship. Only Jealous and mean people can loathe it and kill a lover. She was victimized by her own kith and kin. It is the biggest tragedy.

No one can condone it. These culprits must be dealt with Iron hands and punished severely. The Chiefs of all organizations were sleeping while this tragic cruelty took place not faraway from the citadel of :aw and Justice. Where was the Chief Minister ? What was he doing ? where was the Chief Justice of the Lahore High Court from whom she sought Justice / Where is the Mr. Suo moto the detested creature and creepiest abominable , mischievous act of all time.

The negligence of police officials and the concerned authorities begs question, when would they clean up their act ? It is outrageous and anti social behavior which must be condemned. We apologize to Farzana that we could not save her life. We Pay her tribute for the sacrifice in the way of love. She is a martyr of Love. .May Allah rest her oul in peace and eternal tranquility.

Pakistani elite came into action after United Nations Human rights committee criticized Pakistan and asked Pakistan to take action against this cruel incident, otherwise, Pakistani PM, CJ, Police official would just push the case under the carpet, its a normal thing for the elite who has the same mind set of the Taliban, wahabis, hardliners.

Articles like this in our society, are mere waste of word. Ours is a different rather the queerest make on the planet. We like for others; what we hate for ourselves!
For the same crime, Farzana gets killed; ‘Farzan’ goes scot free!
What about her husband? Must be safe -in every term of the word -and out headhunting another wife!
This is the ugly, filthy and abominable side of the ‘Savage civil society’ that we make!

Mr. Peter Let us not judge others about their sentiments and feelings. We feel agitated over this brutal killing and condemn it. I am sure her husband must be grieved and feeling sad. He has lost his life partner and loving wife. How can he be thinking of head hunting for another wife. We should not become so callous to pass such remarks about him.

It was a shameful and atrocious act that has shaken almost everyone .The society must share the blame of this devastating tragedy. the government must provide security and protection to the women.

We have strayed away from our religion.In Islam Man and Woman has equal rights we are our own enemies.May ALLAH forgive our transgression and put us on the righteous path.Thus make us an example worth following for the humanity.AMEEN

what ever the whole gory episode reflects of the kind of society we are; one phenomenon stands strikingly out and that is the evasive attitude exhibited by the Husband..
1 He ran to the police for the help instead of being with his wife.
2 Being a man he must knew how to act or react in the sort of situation his wife was. That was the moment he must behaved like a true life partner…
3 He might have wielded a piece of brick and acted to the situation.
4 He was not injured because he did not even try to save his wife but on the contrary Farzana was beaten into death in 15 minutes because of no resistance.
5. Leaving all consideration aside, this was not the first time when Farzana’s family tried to kill her so it was her husbands duty to arrange for the security of her before they were on the way to the court.
6. considering the step of marrying against the will of the girl’s family, he must have taken into account all the sorts of eventualities.

Why not to investigate these questions?.

A very sad story, made me cry .The family of Farzana need to read about Hazrat Khadijah who sent the proposal of marriage to our Holy Prophet.M Islam gives the right to women to marry of their choice.Unfortunately, people have these false egos and pretenses that somehow if their son or daughter marry of their own free will it will bring shame on the family.Too late for them i hope they are punished to the full degree of our law and their punishment should be an example to others who might be contemplating.Farzanas death should not be in vain. May her soul rest in peace.