Upending the Logic of History 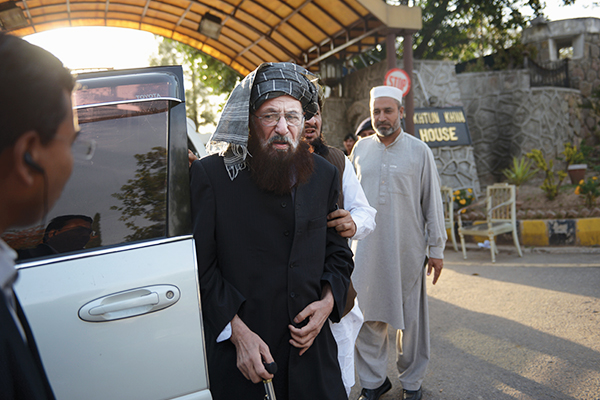 The trouble with releasing ‘noncombatants.’

As part of its negotiating process with the Pakistani Taliban’s Shura, Islamabad has released 19 Taliban prisoners it refers to as “noncombatants.” Going by the April 5 press conference of the interior minister, Chaudhry Nisar Ali Khan, it plans to raise that number to 30 before the start of the next round of talks.

Khan informed the media that while deciding on a military operation against the Taliban is easy and always available, making peace is a far more difficult task. A day earlier, opposition figure Bilawal Bhutto Zardari had scoffed at the official parleys with the Taliban as self-damaging appeasement. Khan dismissed this criticism as “childishness.” He expressed hope that the efforts will bring about peace, and that the other side will reciprocate the releases by freeing noncombatants in their custody, including Shahbaz Taseer, Ali Haider Gilani, and the vice-chancellor of Peshawar’s Islamia College, Dr. Ajmal Khan.

When one is big on rhetoric and low on strategy, the element of hope, and hoping against hope, has a nasty habit of creeping into the equation. No one who understands the essence of irregular war and its conduct can be opposed to talking with the Taliban, per se. However, what is important here is the timing: when to talk, who to talk to, and whether the talks are being conducted from a position of strength.

There are questions apropos of whether the government has fulfilled these conditions before going into the talks, but since that decision has already been taken, we shall not debate that. But the conduct of the talks still needs debating. That throws up questions with reference to the prisoners the government is releasing—at this stage, unilaterally.

What does “noncombatant” mean? Are these people innocent? In which case, why were they in government custody? What were the circumstances of their arrests? Were they rounded up as suspects? If so, why did they remain incarcerated after it was found out that they were noncombatants? After all, it stretches credulity to argue that the government has suddenly found that they are innocent of any wrongdoing. Were they captured during field operations in the federally-administered tribal areas and Malakand? Or were they suspects picked up in urban centers during police and intelligence operations? What is the process which put them in internment and what’s the process that has now released them?

If it is correct that those who have been released were and are innocent citizens, then there is a problem with a system that cannot differentiate between those who should remain free and those who must be captured and put through the wringer. Questions have already been raised regarding such prisoners, including those who have been “disappeared” by the state. It bears no repeating that keeping innocent citizens out of the mischief of state is as important, perhaps more, than bringing to book those who must fall under the mischief of law.

There’s yet another problem here. On April 7, the National Assembly passed the loosely-worded Protection of Pakistan Bill, which, critics say, has some draconian provisions that can be easily misused.

Its proponents say that given the internal-security threat it is important to have such laws even if it is accepted that they veer from the legal norm in significant ways, for instance, by shifting the burden of proof to the accused or the suspect, and through the retroactive application of such laws. If the Interior Ministry’s decision to release Taliban prisoners is taken as an argument, one will be hard pressed to square it with the government’s insistence that this new law is the need of the times.

The converse is worse, though: what if the people the government has released are in fact not innocent? That, while the government might not have direct evidence against them, some or all of them did kill innocent Pakistanis or at least helped kill them? What if they provided shelter or logistics to those who did the killing? In other words, while they might be removed from the actual act of killing, they contributed to it in varying degrees and were complicit in acts of terrorism.

We have no answers to these questions because the Interior Ministry has not provided them. Granted, everyone cannot be told everything. But neither can one allow a ministry to play the role of know-all without any accountability. Has the ministry given full details to the relevant committees of Parliament on what it is doing and why? To my knowledge, it has not.

There is more. On what grounds is the state calling people kidnapped by criminal groups as prisoners and creating a moral equivalence between their circumstances and of those who have been captured by security forces during different operations? Are we saying that security forces have also been kidnapping people?

This is where one needs to say something about the nature of the talks. Dividing groups fighting the state is a good strategy. Treating them at par with the state is not. The line that separates one from the other is a fine one. The government’s initial moves kept the line intact. Its subsequent moves that evince an ‘enthusiasm’ to make the talks a ‘success’ seem to be losing sight of it.

That is bad news. Someone needs to show the ministry the line again. The ministry has begun galloping where it should be trotting carefully. The Taliban were more amenable when the government told them to either take it or lump it. Now, while the government seems too eager to please them, they made a big, public show of how difficult it was for their Shura to extend the ceasefire.

The thing to do is not to meekly thank the Taliban for their ‘generosity,’ but to four-letter them with a middle finger. Talks are meaningful only when they need them more than the state needs them. Don’t upend that logic. There’s a long history behind it.