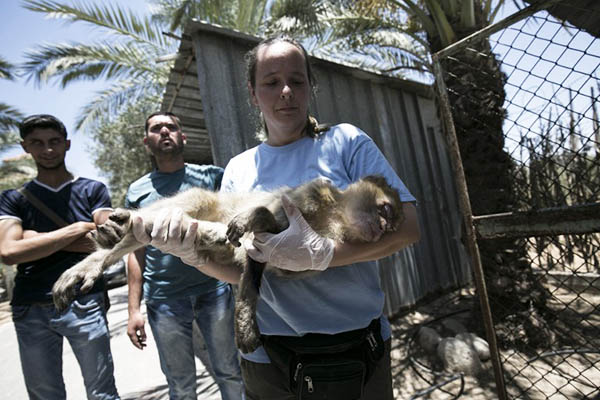 Vets are attempting to convince the zoo owner to transfer remaining 15 animals out of Gaza.

Decomposing carcasses, a forlorn tiger and cramped cages were among the “heartbreaking” sights greeting an international veterinary charity on a mission Friday to a zoo in war-battered and impoverished Gaza.

“There used to be 44 animals. Now only 15 are left,” said Amir Khalil, a member of the small team sent at the request of the owner of the zoo that used to be the pride of the town of Khan Yunis, in the southern Gaza Strip.

An NGO, Four Paws, sent the mission to carry out an evaluation of the health of the surviving animals and the state of their cages. It aims to convince the zoo owner to allow the remaining tiger, monkeys and birds to be transferred out of Gaza, which has seen three wars with Israel in six years.

The zoo—like the half a dozen other zoos in the Palestinian territory—makes a sorry and deserted sight, without visitors because Gazans can no longer afford such outings.

“There are dead animals in the midst of live animals,” said Khalil, amid the stench of rotting carcasses of lions, gazelles and crocodiles. “This is like nowhere else on Earth, and it’s not at all good for the animals nearby” including the tiger which spends its days circling a cramped cage, he said.