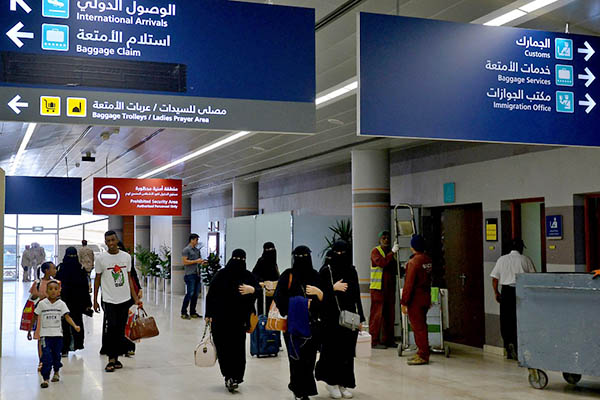 Saudi women arrive at the Abha airport in the southwest of Saudi Arabia. Fayez Nureldine—AFP

Saudi Arabia has eased travel restrictions on women but observers say loopholes still allow male relatives to curtail their movements and, in the worst cases, leave them marooned in prison-like shelters.

In August, the conservative kingdom allowed women over the age of 21 to obtain passports without seeking the approval of their “guardians”—fathers, husbands or other male relatives. The move, part of de facto ruler Crown Prince Mohammed bin Salman’s plan to revamp the national image, ended a longstanding rule that prompted some extreme attempts to flee the kingdom.

But campaigners warn it is easy to sidestep the reform. While allowing travel documents, Saudi Arabia has not done away with “taghayyub”—a legal provision that means “absent” in Arabic and which has long been used to constrain women who leave home without permission.

“Guardians can still file a police complaint that their female relatives are ‘absent’, which would lead to their arrest and possible detention in Dar al-Reaya [women’s shelter],” Eman Alhussein, a fellow at the European Council on Foreign Relations, told AFP.

The system of shelters operated around the kingdom is opaque but accounts of conditions there paint a dire picture. Activists including Human Rights Watch (HRW) say they are run like detention facilities, and it is unclear how many women they hold.

“Saudi [fathers] can’t stop the girls getting passports but they can still declare them missing to local police who will then track them down for the parents,” a Western official told AFP, calling it a “massive loophole.”

Saudi authorities did not respond to requests for comment.

Last year, members of the advisory Shura Council recommended the justice ministry stop accepting taghayyub cases as a way to slowly dismantle the guardianship system, but the suggestion seems to have been ignored. Officials in Riyadh told AFP that dozens of women have applied for passports since the reform was announced. “Today, I came to issue a new passport for the first time in my life,” one 40-year-old woman told AFP as she made the application at a government office. “I am very happy and this step gives confidence to Saudi women.”

The move was celebrated as a historic leap for gender equality, triggering humorous online memes featuring women dashing to the airport with suitcases—alone. But it also prompted laments for the perceived loss of men’s control, with one social media portrait showing fully veiled women wriggling underneath a barbed wire fence and emerging scantily clad on the other side.

Campaigners, however, say that control is far from lost, with HRW warning that male guardians could also possibly circumvent the passport reform by seeking a “court order to restrict female relatives’ travel.” Cases of filial “disobedience” can be filed against adult women—a crime that can lead to imprisonment.

Women also still require a guardian’s permission to marry or to be released from prisons and shelters. Campaigners warn even those with valid passports could wind up in Dar al-Reaya.

Two Saudi women detained there for about a year after fleeing what they called abusive guardians told AFP they were watched round the clock through surveillance cameras inside their cells. They said inmates were subject to flogging as punishment—by men.

One said the shelter in Riyadh also kept a notebook to account for their menstrual period—an invasive practice corroborated by HRW—to ensure they didn’t break rules surrounding Muslim prayers.

A document from the facility seen by AFP described one of the women as “frustrated”, “rebellious” and seeking to sully her family’s reputation. There was no mention of her guardian’s alleged abuse. “Some women can stay in these homes for a prolonged period if their guardians fail to receive them, perhaps as a way to punish them,” said Alhussein.

When their guardians refused to get them out, the two women said they were transferred to another shelter known as Dar al-Diyafa, or “hospitality home.” They described it as a dark place with boarded-up windows and depressed women unclaimed for years. Others made desperate attempts to escape despite tight security.

Often the only legal escape is through an arranged marriage—sometimes to strangers vetted by the shelter—a move that transfers guardianship to the husband, campaigners say. “Many women are stuck there for years with some waiting for someone to marry them—and men come to the place with specifics such as ‘I want a tall girl’,” HRW researcher Rothna Begum told AFP.

Saudi authorities did not respond to repeated requests for access to the shelters.

The testimonies underscore how taghayyub—often a tool against a young generation of what arch-conservatives call “disobedient daughters”—effectively obstructs women from breaking free from abusive guardians.

They also offer clues into why Saudi women alleging abuse undertake perilous attempts to escape overseas despite the pro-women reforms, including a historic decree allowing them to drive. “Women are free to get passports but guardians still control whether they can leave their homes,” said Alhussein.